Posted on February 19, 2019 by jeffcohistory

This site is no longer being updated. For news from the Jefferson County Historical Commission, please look for us on Facebook (@JeffcoCOHistoricalCommission) or at the Jefferson Co. website. We are also on Twitter, @JeffcoHistory.

Posts and pages here are being retained as a searchable historical record. The site was actively maintained on WordPress on behalf of the Jeffco Historical Commission from 2011 to 2018, and was available at HistoricJeffco.org from 2004-2010.

The Jefferson County Historical Commission (JCHC) held its 2018 Historic Preservation Symposium on May 19th at the Lakewood Heritage Center.  This year’s theme was “Building Communities: a Historical Perspective.”

John Steinle, a member of the JCHC, spoke about “How Volunteers Create Communities.”  His presentation included interesting facts about the roles that various local volunteer groups have played in preserving the rich history of our state.  One example is PLAN Jeffco.  PLAN Jeffco was created by a group of volunteers in 1972.  Working with the League of Women Voters, PLAN Jeffco put an initiative on the ballot to create a tax funded county open space program to buy and preserve natural and cultural areas of value.  The present-day result is seen in the Jefferson County Open Space parks that many of us enjoy including Apex, Elk Meadow, Matthews-Winter and Deer Creek Canyon parks.  A copy of John Steinle’s outline for his talk can be accessed here: Steinle Outline Volunteers Talk

Husband and wife team Bonnie and Richard Scudder, both JCHC members, spoke about “Saving the Historic Octagon & Barn at Shaffer’s Crossing: The Power of Community.”  This presentation focused on efforts to save an historic Octagonal building at Shaffer’s Crossing near Staunton State Park that has stood since 1900, and has had a myriad of uses, including a facility for barn dances, the Urmston School, a grange hall, community center, horse barn, sheep barn, and church.  The Octagon at Shaffer’s Crossing is currently owned by the Archdiocese of Denver.  The building was selected this year for inclusion on Colorado Preservation, Inc.’s Most Endangered Places List. http://coloradopreservation.org/programs/endangered-places/.  For more information about the ongoing efforts to save the Octagonal building click here: Saving the historic Octagon and barnfinal; Jeffco presentation; Looking Forward; How Volunteers Create

Registration is now open for the 2018 JCHC Historic Preservation Symposium.  This year the theme is Building Community: A Historical Perspective.  Register early. Space is limited and last year we sold out! Here is the link to register!
https://jchc2018symposium.eventbrite.com

The Jefferson County Historical Commission, 1st Judicial District, and the Colorado Supreme Court Law Library celebrated the completion of Phase III of the Judges Wall, which features biographies of 73 additional judges who served in the 1st Judicial District between 1858 and 1970. The display includes judges from the Gold Rush Era (1858-1861), the Colorado Territorial Era (1861-1876), and the Election Era (1876-1967). Photographs accompanied biographies for the majority of these judicial officers. This display joins the 46 judges featured in the Merit Selection Era on the opposite wall, which was presented in December 2017.

The Judges Wall covers 159 years of judicial history. In addition to the judges, the display features three large sketches of early Jefferson County court houses by artist Carol Perricone, wife of retired Chief Judge Gaspar Perricone, a sketch of our current court house by Doyle Harrison, graphics designer, and an historical sketch of Gold Rush Justice, donated by the Gardner Family. In addition, several maps which include counties in the 1st Judicial District during different eras help demonstrate the evolution of the current 1st Judicial District. One map is a reproduction of an historical 1862 map of the Territory of Colorado, the first to show the 17 original counties (including Jefferson and Gilpin. This map was donated by Wes Brown and the Denver Public Library Western History Department.

Approximately 50 individuals attended the celebration. Chief Judge Philip McNulty was the first to speak and gave the “Welcome,” recognizing current judges, retired judges including Justice Brian Boatright, spouses, widows, including Joyce Jamison, children, grandchildren, and a great-grandchild, and other members of the judicial community. Cynthia Shaw, Chair of the Jefferson County Historical Commission spoke next, recognizing members of the JCHC and Jefferson County administrators in attendance, and explaining how this project aligns with the JCHC mission. Dan Cordova, who oversees the Colorado Supreme Court Law Library and has served on the Judges Wall Committee since its inception, introduced his staff who assisted on the project, and the members of the Judges Wall Committee. Bonnie Scudder introduced other individuals who have made significant contributions to the project, including Deborah Darnell of the Mountain Genealogists Society, Crystal Samms of the Gilpin County Library, and David Forsythe of the Gilpin County History Museum. She also spoke about the final phase which will include county judges from 7 or more counties that are no longer in Judicial District #1.

Since 2010, the Jefferson County Historical Commission has given the Norman and Ethel Meyer Award to individuals and organizations to recognize special contributions to the preservation of Jefferson County’s historical resources.

The joint awardees formed a public/private partnership, working together to improve the Denver Mountain Parks and restore their historic structures.  DMPF, which is a non-profit foundation raises funds and provides public education to assist Denver in improving the parks; and Denver Parks and Recreation brings its budgeted funds and provides professional staff to plan, design and implement the improvements.

Together, they have crafted a plan to restore 13 historic structures, including well houses in Bergen Park, Little Park and Filius Park, shelters in Genesee Park and Corwina Park and the iconic chimney in O’Fallon Park.  To date, restoration work has been completed on the Chief Hosa Shelter, the Patrick House in Genesee Park and shelters in Newton Park. The team has also worked to create a new logo for the Denver Mountain Parks and is working on interpretive signs and maps for the parks.

As part of its fundraising efforts, DMPF has published both a video and a book called Denver Mountain Parks – 100 Years of the Magnificent Dream.  The book includes an extensive history of the parks and photography by John Fielder and W. Bart Berger.  Copies of this beautiful book can be purchased through DMPF’s website: Denver Mountain Parks Foundation

The Jefferson County Historical Commission applauds the work of Denver Parks and Recreation and DMPF and wishes them ongoing success in restoring and preserving the history within the Denver Mountain Parks.

The Octagonal Barn was built in 1927 by local builder Al Rugg for three brothers – George, Oscar and Ted Johnson.  The Johnson brothers used the barn as their blacksmith and repair shop, and as a cattle barn.  They kept a pet bear outside in a cage, and locals would stop by to feed it.  The barn is significant for its association with historic area landowners: the Bergen, Johnson and Buchanan families, as well as for its distinctive octagonal architecture.  It is one of the few remaining examples of octagonal architecture in Jefferson County.

Today, the barn is home to The Blue Angler, a business which provides education for anglers and guided fly fishing tours.  Bluequill Angler

The residence of Samuel and Albine Romano was listed on the National Register of Historic Places in September of 2016.  The house is a one-story Arts and Crafts style bungalow.  The Romano home was originally built around 1924 by Camp George West commanding officer Leo Rundstein.  Made of fieldstone gathered from its vicinity, it was built in the local architectural movement now recognized as Golden Rustic. In 1927, it was purchased by Emery and Mary Barlock, immigrants from Budapest and Yugoslavia. Emery John Barlock ran the first cash store in Golden and began raising mink here. In 1929 it became the home of Italian immigrants Samuel and Albina Romano, who that year built their own Golden Market, which is still standing and well preserved.  They operated the store and the La Romana fox farm here for many years while raising their family.  They also had the Fox Trot Inn dance hall and a tenant trading post in the reassembled Boston Company building (itself unfortunately burned down, but its motel court very much still standing nearby).

William F. Cody was born in 1858.  Cody received his famous nick-name, Buffalo Bill, while he was scouting for the U.S. Army.  Cody became a well-known showman, appearing in his own show called the Buffalo Bill Wild West Show.  The show featured real cowboys, cowgirls, Lakota Indians and wildlife.  Buffalo Bill came to be a symbol of the American Frontier, both in American and Europe.  Buffalo Bill died in January of 1917 in Denver and is buried in a cement covered grave on Lookout Mountain.

More details about the life of Buffalo Bill Cody can be found on the website for the Buffalo Bill Museum and Grave: Buffalobill.org

Bob Briggs was honored for his many years of public service—both as an elected official and as a volunteer.  Mr. Briggs served as the Mayor of the City of Westminster, on the Colorado Legislature as a Representative for District 29, and as an Adams County Commissioner.  Among his other endeavors, Mr. Briggs also served as a Chair and board member for the Westminster Chamber of Commerce; a Board Member of the Regional Transportation District; Chair and Board Member of Westminster Open Space Board; and a member of the Butterfly Pavilion Board of Directors

You can read more about the award winners and read the Writer’s Award winning articles, in the 2017 edition of Historically Jeffco.

Photos by Leda S. Thaler, a member of the Jefferson County Historical Commission. 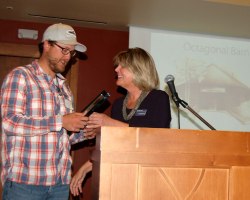 Jeffco Commissioner Casey Tighe addresses the audience at the 2017 Hall of Fame and Awards event.

Posted on October 5, 2017 by jeffcohistory

This event is free of charge, however space is limited. Please RSVP TODAY to: Dennis Dempsey, at 303-271-8734 or ddempsey@jeffco.us.

Posted in events, hall of fame | Leave a comment

Some of life’s greatest pleasures can be found between the covers of a book, and Evergreen is rich in stories. Many here will say some of their favorite tales have been collected by columnist Hank Alderfer. Now, Alderfer’s columns have been used to create a new book called Yesteryear. You can hear portions of the book at a special reading and author signing Wednesday, August 23, from 5:00 to 7:00 p.m. The event will be at Augustana Elk Run, 31383 Frost Way in Evergreen. Music will be provided by John and Peter Neilson and wine, cheese, and chocolate will be served.

Alderfer’s vast knowledge of Evergreen’s residents helped him create intriguing stories about local ranchers, families, and Jefferson County life. He received the Evergreen 2010 Leader of the Year Award for demonstrating creative and innovative solutions to community issues in the mountain area. Other distinguished authors represented at the reading will include the following:

“So many people love stories about our Evergreen community and want to know more,” says Augustana Elk Run Executive Director Rita Waxon. “The insights of the local authors at the reading shed light not only on the past, but on how we view the present.”

The event is free of charge and books will be available for sale and for autographs. For more information, please call Kristina at 303-679-8777 X1604.

Assisted living at Augustana Elk Run can mean more freedom, joy and time. Services are tailored to your loved one’s unique needs and preferences, so he or she can take advantage of new friendships, opportunities and possibilities.

Augustana Care provides housing, health care and community-based services to older generations and others in need—and helps those we serve live the lives that most inspire them. The principles that guide our work are as follows: